Jeez, where did the weekend go? Why is it that time one has to fill as pleases always seems to go that much faster than time that’s planned and accounted for?

While generally speaking, I love my job and am exactly where I want to be, sometimes I wished I had a little bit more time to spend on my crafting projects.While knitting is my big love, I also enjoy other crafts. Sewing, crochet, polymer clay … All of which I indulged in this weekend.

A little bracelet was made.

This is the vest which got the buttonholes. It was a pattern from a german knitting magazine, Stricktrends, which I acquired on a trip over in April, and should have beeen a short sleeved cardigan with ruffles around the front.

Unfortunately, I ran out of yarn a few centimeters short of finishing the second sleeve. I decided to make it into a vest, and leave the ruffles.

Instead I adorned it with some of the single vintage (probably 1920ties, mother of pearl) buttons I have.

I like how it turned out, even if it’s a far cry from what it was supposed to look like.

Here’s a photo of the lovely Anjou pattern close-up. The colour came out really weird in this one, it is much more like the photo up there ^^

I really like the airyness and geometry of the pattern, maybe I’ll give the cardi another go at some later time.

Also, some time was spent on my Other Mission ™.

My Other Mission ™ found me one morning when I stood in front of my wardrobe, and said the sentence all females of all times have uttered at least once in their lives: “I have NOTHING to wear!”

Of course, I was staring at a wardrobe filled to the brim while wailing the dreaded sentence.

But it’s true. I have NOTHING to wear. Well, okay , so maybe not exactly nothing, but there are far too many things in my wardrobe which I can’t or won’t ever wear again. I have put on weight, for one thing. And I’m beginning to think short-sleeve-over-long-sleeve-t-shirt is not the right solution to every situation.

So, clearly, I need to de-clutter my wardrobe. This is where The Mission ™ comes in. I decided to alter or upcycle or recycle or refashion all items I can’t wear any  longer.

I did some too-tight-and short-tshirt-to-panty transformation this weekend – I might be a little bit obsessed with that particular refashion right now, too …

What did you do or make on the weekend?

As you might have noticed, I have added a new page: The Stitch Library.

I’m always on the lookout for new stitches, and I take them where I find them and how I find them. However, I found it’s nearly impossible for me to follow a written lace pattern, while working off a chart is rather easy and makes memorizing the stitches and visualising the pattern a breeze for me.

That of course means that rather often, before I actually start knitting anything, I spent half an hour (or so) in front of my PC and chart my pattern.

And because there probably are more peeps out there who find it easier to work off a chart, I am sharing my stitch library with y’all! All stitches in there will be offered as .pdf document, and include written and charted write-ups.

Right now, there’s only one measly stitch to find … please be kind and patient with me, I’ll build it up one by one! And no, you won’t have to wait for me to start or *gasp* even finish a new project before I add the next stitch. I’m aiming for at least one per week, possibly more, though. 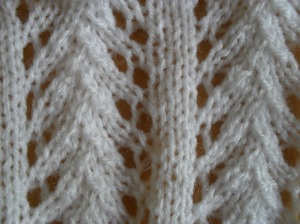 Tell me – what do you prefer, written or charted?

I’m halfway through the shawl, which means this is going much faster than I expected.

Overall, I’m pretty pleased with how this turned out – if I’d start this over again, I’d make the bottom border a bit wider (I’m afraid I didn’t count properly and missed a couple of rows, cough) so that it would be about the same width as the side borders.

The re-alignment of the pattern definitely pays off, methinks.

What do you think?

I’m nearly caught up to where I was before frogging it all.

Can you see how the lace panel cuts in and out of the garter border? That’s how it’s written up in the pattern, but I didn’t really like it, so I decided to “fix” the pattern. And please forgive the crappy shot, it was after midnight and I had to frog right then so I could cry myself to sleep after that and wouldn’t lose all of today fretting.

Let me show you what my thinking process looks like:

At the top left you can see my chart of the pattern according to the Newspaper.

Beneath that is the band from the yarn I’m using, in case I need/want to buy more at a later point – this way, I’ll always know where to find my reference sample (yes, that’s a braided sample right next to it).

Underneath my new, cleaned up chart. I made one further adjustment while knitting into the first lace panel, tho, and that was to take off one stitch at the end. That means what I knitted was 17 stitches garter stitch, 9 full repeats of the lace pattern, one repeat minus last stitch (which would have been the “groove” purl between the single repeats) and finally another 17 stitches in garter stitch.

I am much, much happier with what it looks like now – oh, I also changed from “knit 2 together” on both sides of a lace panel to “ssk” on the right side and “k2tog” on the left sides.

After spending about 15 hours knitting through 3 entire balls of yarn, I began to suspect that I had a monster on my needles.

The original pattern suggests 9 oz of 4-ply yarn, knitted on a no. 7 needle.

I researched. Being from Germany, ounce is not a measure that easily translates to me, so I found a website with a handy converter. It said:

I ordered 6 balls a 50g, thinking I’d be on the safe side. When I realized that after 3 balls I wasn’t even close to being halfway through (as I should have been), as a matter of fact hadn’t even finished a single full repeat of the lace pattern, it dawned on my that something was wrong.

Next up for questioning: the needles. I was knitting on 4mm bamboo circular needles. I double-checked. Here and here. And in a few other places. All of them indicated that my needles, if anything, would be a tad smaller than suggested for the original pattern. Still, I ended up with 112cm of baby blanket.

Now, don’t get me wrong, I’m not the cheap kind. I’d be happy to just buy more wool, and knit may way through this – but it’s simply too big. It’s of no use for a tiny baby. The poor thing would probably drown in it.

So, without further ado, I frogged the monster blanket. *cue worlds tiniest violin* And cast on again, this time about half the stitches specified in the pattern. We’ll see how that goes, but so far, it looks good.

And in fact, there was another aspect of the pattern I didn’t really like which I can fix now. More details about that in a future post. 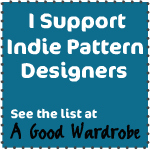