In fact, all I did this week was finally put some buttons on the second make of Simplicity 2447. These are not the buttons I thought I’d use – I chickened out, and got some press fasteners instead. To be fair, these had been my first choice, but it took me a while to find them online – in the end, I got them at Jaycotts, as I should have known I would 😀

I think I like how it turned out, but now, looking closely, there’s still some weird wrinkling going on. The diagonal lines on the front don’t bother me, but the ones around the armscye might need closer investigation.

The most noticeable change I made was to the collar – I left off the collar, and just turned the collar band into a mandarin collar, which I like SO.MUCH.MORE.

There’s more wrinkle action going on in the back … not too bad, tho. Definitely wearable 🙂 In fact, it’s on my back while I write this.

This has come a long way from the first, not-so-wearable muslin, and I’m happy with my new short-sleeve gingham shirt. Now all I need are a pair of snakeskin boots to go with it. Right?

After pretty thoroughly messing up my first take on this blouse, I applied the lessons learned and made another one.

I used some more gingham, though of a different colour, from my stash (to be fair, I bought this a few weeks ago to make a blouse).

This make turned out much better than the first one, and I’m fairly sure it’ll see some wear. If the weather ever allows for a lightweight blouse, that is. Seriously, Dear Great British Summer, it’s about time you drop the being british and show more of your greatness.

Weather woes aside, changes I made include:

– omitted the collar, and used a smaller version of the neckband as mandarin style collar.

– made the pleat the right way round.

A change I should have made:

– place the pockets a bit deeper.

I really like how the shoulders fit now, and that the strain lines are gone. The front plackets are actually exactly the same lengths, which makes me somewhat proud.

Pretty much the only problem I ran into was the intefacing. Since the medium weight I used on the first version was a bit too stiff for my likening, I got some lightweight interfacing, which turned out not to be fusible. I’m not sure if that’s just the way it’s meant to be, or if some other reasons caused it not to bond, but no matter what I tried it wouldn’t stick to the fabric.

So after throwing it away in a fit (and pulling it back out of the trash bag – not a kitchen trash bag, I might add; when I sew I keep a plastic bag next to my workstation so I can dispose of all snips and scraps immediately), I eventually decided to just baste it on by sewing very closely to the seams, and that worked just fine. 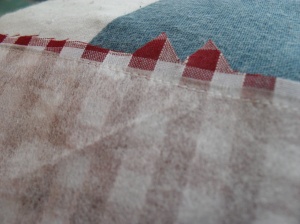 I also interfaced only half of the plackets, to avoid them becoming too stiff.

And because the hems turned out really wonky last time, I applied my new favorite trick: a stitched “helpline”. To use this easy trick for an even hem, just sew a line of stitches 5/8″ away from the border, fold over along that line, press, fold over once more and you’ll get a super even hem line with all fraying enlcosed. Yay! Worked a charm.

The other thing that still bothers me about this blouse is the weird ballooning effect in the back. I’m not sure if that’s just the fabric … maybe a fabric with more drape would fall better? I might also try to gather the back instead of the pleat … any advice would be great!

Now all I’ve got left to do is sew buttonholes and buttons. This is not a super complicated project, but it takes a few hours, due to the princess seams and pockets and all that jazz, so by the time I was fninished  I needed a break.

But the buttons are picked, and lucky me has a another day off this week, so hopefully the baby won’t have to wait too long to be truly finished.

Yes, these are from my Summer Sewing Swap parcel! Love ’em!

The other great new thing I used while making this blouse? I finally got around to making myself a tailor’s ham, and now I wonder how I ever lived without one.